Nature and other nasties

A dead quail in one hand and a padlock key in the other as twelve chickens clucked at my feet for treats. A tricky moment. Would the curious chooks take a peck if I laid the dead thang at my feet? I settled for the windowsill. Poor at the best of times my lock skills hit melt down as the weather changed from grumbling thunder to full on sloppy dolloppy rain. My flip flops became slop slips. Worse, I had to actually look at the dead thang to pick it up again.

Not content with singlehandedly doing my own family home thang, I’m covering another. In the country. With more livestock. I know there are twelve chickens because we count them out in the mornings and count them back in, in the evenings. I’m not so sure of the numbers of ducks, rabbits ferrets and goats. Two wild ducks, who know a good thang when they see it, have additionally taken up residence. There is also one Gos Hawk.

I don’t know a lot about Hawks, I am pleased to say. But I know they watch you. Luckily this Hawk is in ‘moult’, so cooped up right now. Hence the padlock. So I didn’t have to watch her, watching me. Unluckily, she is unable to hunt so needs feeding daily. She eats dead thangs. Which have to be defrosted. And picked up. And poked through a small tube. Thank goodness for surgical gloves.

Gorgeous Boy was supposed to do the Hawk thang. But he was out. He did text to check if I’d done the deed. When I bemoaned the experience he replied that he does it with his bare hands. He is most certainly a real boy. I am not. Nor would I want to be. You don't see me running around a field, in the rain, in shorts, and a superman top. That is the very essence of his boyness.

Last week was too unbearably sad to blog. So I didn’t. The King of Pop’s death was not the first death I’d had news of. It wasn’t the second either. Or third. Or fourth. It had the least effect. I am sick of his songs. Overplay is overkill.

Before school yesterday, the lids and I returned home to sort our own animals. We were greeted by a dead goldfish on the kitchen floor. I think it was making a dash for freedom. It failed.

Read all about it 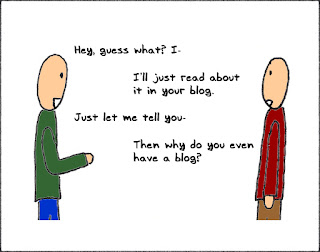 Thanks and courtesy of almostmakessense
at 22:10 No comments:

I tried to go to Rehab

‘Needs to get out more’ I thought as I hoovered the tumble dryer. This was after I’d noticed an independent eco-system growing on the fluffy pink sofa throw. So, the throw got washed. Then the throw got shook. What appeared to be a rash on my arms was, in fact, pink fluff. All available surfaces in the nativity room were equally covered in the same pink fluff. Even after a turn in that great fluff collector aka the tumble dryer more of the pink fluff stuff appeared. Hence the hoover. What else do you do on a day off?

Good news from the hurdy gurdy hand guy: the Teenager’s thumb is healing. Hopefully, no surgery: so another cast, for another three weeks. Now she’s sporting a high five rather than thumbs up. My writing, in permanent marker, ‘keep dry’ and ‘do not use’ wasn’t a cool thang to do as she went camping. Neither was her using it to bang in tent pegs, or as a rounders bat. Nor, upon her muddy return, getting in a bath, without sealing the seal on the seal-it-to-keep-dry-in-water-thang.

As I walked the dog I reviewed the life lessons I’ve learnt this week:

The dog walk took me past the Priory. It looked ever so inviting. I wondered whether hoovering a tumble dryer was reason enough for a ‘wee holiday’, but was distracted by whether I could see pink fluff in the dog’s do. Reality brought me back to the important issues of my day. Not exactly world poverty or hunger, nor even tube strikes but much more pressing all the same. Did I have enough food in for tea for the lids and the dog? Or was I going to have to face another supermarket sweep and what other same-old-same-old dull dull chores would I fit in before the school run. Due to the demands of the job of He-who-must-be-adored of saving London and, increasingly, Spain (the same demands that put coffers in the bank) I've recently been feeling, ever so slightly, like a single parent. Without the weekends off.

Being such a shallow soul, when the sun came out, my mood lifted.

Not so rosy in the garden

Returning from the half term heat the hens started a-laying. Scores so far: Clucky 5, Kebab 1. Kebab’s single effort was egg-shaped but it’s pushing even the little-un’s great imagination to call it an egg. Her genetically hybridified heritage (Kebab’s not the little-un) to lay virtually all year round is being most firmly rejected. She becomes more crazed daily and the bad joke about the bad korma of her name haunts me. Last night Crazy old Kebab ‘went’ for the dog. Ever courageous, the dog dived on her favourite dwarf (old bath toys now get recycled as dog toys) and instead of standing her ground both dog and Dopey went hurtling into the bushes.

Now they’ve both stopped a-laying - the chickens not the dog. Obviously. Because if the dog ever laid anything other than in my way then the whole world would know about it. Anyways, instead they are a-scratching. Fine when they confined themselves to lawn moss. Foolish me welcomed the gardening help. A flowerbed of foxgloves was their next territory. The same bed which had trouble recovering from the little-un’s weeding expo. They need a dust bath I thought, perhaps we’ll get more eggs if they are happy free-rangers. Let them have their bed! And yet, my mantra returns: give ‘em an inch and whaddayaknow? They found their way under the netting: my pathetic attempt at veggy protection. I shoo them and they find new nectar: what was once the spring bulb patch is now a mulch of mud and dust. Nowt remains under the roses. They have scratched and pecked around the newly planted sun flowers. The tallest sunflower competition has, unfortunately, fallen at the first hurdle.

Now what we need is for He-who-must-be-adored, freshly returned from boozing/working in Spain, to spend sometime, outside his office, building a mega-chicken run to stop all this free ranging malarkey. Then the chocks can recover their layabilty (wouldn’t we all like to?) before it’s time for their summer moult, during which time, apparently, there generally is no a-laying.