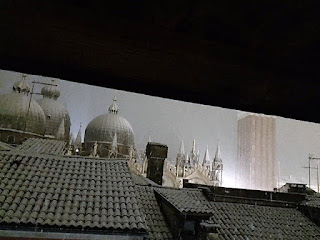 As I wait for the bells to sound out 2017 I’m saying good-riddance to that bummer of a year. Discounting Trump, Kim Jong-Un, and May-bot’s general election, it was only the second half that really stank. 2017 began on a personal high - I hit the big 5.0 in Venice with the three dustbin lids. The beautiful city was picture perfect with a light dusting of snow. And though the endless steps and bridges covered in icy-compacted snow were deathly dangerous, they looked oh so pretty. There was also that sibling trip to sunny Mallorca, a lush school gang celebration in Brighton and a fantastic family reunion in Ireland.

Fast forward: mid-year, mid-house move, and a mid-life health MOT. After a battery of tests involving very little dignity, large needles, biopsies, scans and hanging about in breezy NHS waiting rooms in very thin gowns, I found myself in the middle of a massive life plot change.  Unexpectedly and reluctantly I joined the not-so-exclusive club of the estimated 2.5 million people living with cancer in the UK and I am now one of the ‘one in eight women diagnosed with breast cancer’. My cancer is common in the over 60s and those that don’t breast feed. I fit neither group, but found comfort in other statistics like the excellent survival rates, and the increasing proportion of people living longer. My outlook is pretty great: this was caught early, and the treatment plan has proven itself with fantastic, and constantly improving, results.

Despite the limitations of working in systems designed in the 1940s the NHS staff have been unfailingly brilliant. But, there’s no denying the treatment, so far, has been grim. My oncologist described chemotherapy as akin to flooding your body with poison and predictably, I’ve lost most of my hair.  I was surprised at how little that bothered me, though I’m presently enjoying a moratorium on selfies. The first batch of hair to go was a very small clump and was in the main distressing because I was in the loo at work and about to go into a meeting. Over the following days I learnt losing shoulder-length hair is very very annoying.  And, adding plunging the shower to the daily chore list was a real bore.

My eldest tried, badly, to cut my hair. We ended up clippering it to an inch all over, which thankfully led to much less plunging of the shower, and a general reduction in the amount of hair scattered about the house. My boy decided to brave the shave in solidarity. His short clippered head and beard made his face look rounder and he looked tougher than his usual cheeky blinder long top look. Sadly, I didn’t look tough so much as a twin to my follicle-challenged brothers – not an attractive look for a woman of any age.  Earrings, a bright lipstick and an assortment of hats have sort of provided a solution to looking less like my brothers.

In true teen-girl style, my little-un said, categorically, she would not join the shaving party:  it had taken a long time to grow her hair long; she wasn’t feeling that look, and couldn’t see how it would help me in anyway for us all to look like weirdos. In these strange and uncertain times, it is gratifying to note: the outlook of teenagers remains unchanged.
at 17:20