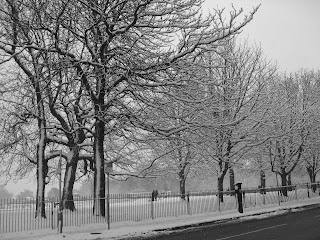 The last time it snowed was a revelatory moment for me. Whilst the world and his dog tobogganed and gamboled in the snow I was a misery. I spent the day be-moaning: the river running through the house, the cold, the endless damp pile of clothes, the cold, the extra laundry, letting the heat out, the danger, the cold and all that malarkey. That was then.

So when the first fluttery flakes started to settle on Sunday night, the little-un was ordered out of her jarmies, to wrap up, get outside and bloody well enjoy herself! So keen was I not to re-visit the hum-buggery of my past that I made an executive decision that even if the schools were open, if this proper, powdery snow settled my dustbin-lids would not go to their institutions. Warm childhood memories made on a snow-day-home-day are more important than anything the fun-killers could attempt to teach whilst keeping them caged inside.

Monday morning we were up and dressed with whatever was to hand. No teeth nor hair were brushed. No faces washed. Biscuits for brekkie then out the door. Has the parenting pendulum swung too far from the hum-buggery past towards the present is a gift to be ENJOYed at all costs?

With the excuse that the path needed to be cleared we started the snow man pile under the constant bombardment of snowballs. They do hurt. They do sting. They are cold and wet. No matter how many times you say ‘no headshots’, your head continues to be pelted. A humbug I am not. This was snowy fun.

My ‘live for the moment’ happy parenting nearly crashed and burned with the teenager accusing me of ruining her life with my hateful rules. I fought the instinct to shout back in true toddler tantrum style ‘don’t ring me to take you to the hospital with your broken limbs, or frostbitten toes’. Instead, I said ‘You can go out and play with your mates when you put some dry non-canvas shoes on’.

Later in the park we laughed at the giant snow penis, the pathetic assortment of make-shift sledges, the groups gathered behind giant rolling snowballs, the snow walls behind which snow-war-balls were built and fired. Our blond dog up to her muddle in snow.

Londoners are not known for their friendliness but when it snows ain’t it thrilling? It brings out the best in people. We smiled and laughed with strangers. Passing people asked if they could photograph our snowman. Now I know the country nearly came to a standstill, schools were closed, rubbish was not collected, accidents happened, the economy is in enough trouble already. But it snowed. And we was happy :)
at 18:00