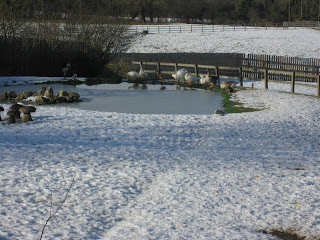 Without wanting to give too much away about the exiting nature of the private conversations I have with Supersis, it so happens that on occasion we will ask each other what each is preparing for dinner. Although blood relations we appear to come from different schools of cooking – she being the queen of the stab stab zing, me preferring to use the cooking space as an escape from the rest of my household and its chores. Yet, despite these differences, more often than I like it happens that we buy the same thing. So yesterday, upon her suggestion, we joined forces with our respective lamb joints, purchased separately and independently, yet roasted and consumed together. So, my family decamps to hers. Her vegetables are pre-prepared. Mine require endless standing at the sink. She does household chores and I cook.

Whilst I was carving (hacking more like) she tells me she has a bone to pick with me: she’s read my blog. As I was up to my elbows in grease I couldn’t run and hide so I racked my brains trying to remember what I’d written that could have offended. I’ve only been back at this for less than a week and already I’m having my bones picked!

I hereby apologise to Supersis for giving the wrong impression and I want the whole world to know. Yes she does live with a lot of animals. But not one single one of them is hers. Especially not the psycho cat. They have all come into her life via the whims of others: her husband, her daughter, her mother-in-law, her brothers, or brother-in-laws. Or they are foundlings and she has become known as an animal type what with being married to one and mother to another animal fanatic. Yet, she cares for the animals, she feeds them, helps train them, cleans up after them, she even breaks the ice on the pond for them (in the morning, before breakfast, as if there isn’t enough to be done, after the cat has poo’d in the sink and the dog pukes up a delightful raw eggs and dog food combo). She wants it to known that yes she does all this. And she more importantly wants it to be known that no animal belongs to her. And, more sadly: no animal is loved by her.

Whilst she ranted on I thought ‘every cloud’. So rather than certain people think I am a stealer of animals I want it to be known that I am the one and only one that bucks the trend in Supersis’s life. I am the first person to take an animal away from Supersis.